flailing flag from the front

This blog was originally posted to The Dresden Dolls Diary.
this isn’t the blog that i wanted to write.
the blog that i wanted to write was epic and profound and detailed
and full of photographic images and reflections on the last two
months. in fact, i have several drafts on my desktop complete with
photos. i’ve been all over the fucking place a lot has happened. i
was in montana, doing a solid week of training for yoga-teaching, i
was in seattle working with my new back-up band, i was working on the
record in LA and san fran and somewhere in there i was in new york
with brian and other friends putting on the finishing touches.i still might write that blog. it’s long, but every passing day makes
it feel less relevant, because i’m stuck in an entirely different
swamp now.
i need to at least relate my current state of mind. are you guys
still out there?

during all this mess of the last two months i got gradually lost in
every way.
my mind started to deteriorate and my body tried hard to keep from
crashing.
i went vegan for a while for survival.

my whole infrastructure started to feel like it was falling apart.
my home, my team, my brain, my career, my general web of safety all
going the same way: nothing literally falling apart but nothing
working at capacity anymore, either.
the basics keep me from despairing: my record is incredible, i’m in
relatively good health, nothing is awful.
the difficulty lately lies in wondering what the point of all the
struggle has been. i’ve been working my ass off for years, non-stop,
deluding myself into thinking that it would get easier and more fun
and it’s only over the course of the past year or so that i realize
i’ve dug my own grave more than i have dug the tunnel to freedom.
it’s just the same cycles over and over. don’t mean to sound morbid
or anything here, but the theme is applying to life in general. i’m
watching all these people around me rushing and struggling, caught up
in the game, everybody working their fingers to the bone. myself
included.

it reminds me of that wonderful part of “eat, pray, love” where
elizabeth gilbert goes into a lingerie store in italy and buys a
shitload of fancy underwear, even though she has no lover and no
chance for intimacy even remotely around the corner. she finds
herself thinking about the italian soccer fan she was sitting behind
a few days before who was screaming at the top of his lungs at
Albertini, the star player, who had just passed the ball to midfield
where there was absolutely nobody waiting. the fan was screaming:
“Per CHE, Albertini?!?!?? PER CHEEEEEEEEEEE?!?!??” in her own mind,
she was asking the same question: “For WHO, liz??? FOR
WHOOOOOOOOOOOOO??!??!?”)

this is how i’m feeling lately. maybe it has something to do with not
touring for too long. the disconnection is pretty complete. for who?
for me? for you?

the biggest delusion i’ve revealed is that i keep learning the same
lesson of self-reliance, or is it just my puritan upbringing?
i’ve had these mini-realizations before, but this one was more seismic.
i was working for years on the assumption that if i just played hard
enough, wrote well enough, felt passionate enough, proved myself
enough, toured enough, won enough fans, who know…that help would
come swooping in like a magic carpet and take all the responsibility
away. but this is totally childish thinking. there is always a
support staff, but that’s what they are: a support staff. i am, will,
and should always be the end of the line, the only one in control of
my own show. i don’t know why i started thinking, at a pretty early
age in my career, that if i just worked hard enough i ‘d be able to
hand that responsibility off to a team of experts. i am the expert.
it’s terrifying to realize that and have to re-format your mind to
the new scenario. it’s not only applicable to my career, it’s just as
applicable to life. you wander through your days thinking that you’ll
find that perfect scenario, job, lover, partner (fill in the blank)
who will somehow unburden you of your struggling existence, your
decisions, your responsibilities. it’s bullshit; only you can truly
unburden you. but the fantasy is very, very tempting. does it ever
work? if you exchange stories with anyone (try someone who’s recently
been divorced for starters) you’ll find that the delusion is an
extraordinarily common one. we want to believe in the fantasy more
than we want to take responsibility for the fact that we are, indeed,
the only ones who can run our own show.

one of the yoga teachers who was in montana left me with a choice
phrase that keeps reverberating around in my head.
we were in an incredibly long and hard pose, sweat pouring and people
groaning.
he said:

everybody cracked up laughing. we all knew what he meant. there is
that fantasy, in every moment of tension and struggle, that help will
magically arrive and make all the pain and suffering go away.
so many people in my life…my agents and managers and engineers and
producers and lawyers and accountants and bandmates, the list goes
on….the airport luggage carriers, the hotel clerks, the
taxidrivers, the people who make my sandwich….they’re all helping,
and god knows i need them and they need me to function to
survive….no doubt. but they’re not going to save my life, they’re
not going to give me any answers, they’re down here in the mire with
me, trying to figure this shit out for themselves. wondering, too, if
someone is going to open the door to their bedroom one night and say:
“i know you’ve been waiting for me for years and i’m finally here.
things have gotten way too out of control, my friend. before we get
to the meaning of life stuff (and believe me, we’ll get there) let’s
start with something simple, like your closet.”

this is turning into the blog i wanted to write.
i should be warming up my voice for tonight.

i’m trying to focus on each small task at hand until my shit gets
together in some recognizable way.
i’m supposed to be leaving for australia in a week and i still don’t
have a plane ticket or a plan of where to go and stay, even though
there are shows booked, which makes me wonder if i’m going.
my head works in strange ways in this regard, and always has: until
i’m at the airport, i still think there’s a chance it might not happen.
this fear is founded, actually, on a life and schedule in which
things – often beyond anyone’s control – have fallen apart at the
last minute often enough for me to not trust anything unless it’s
right in front of my face.
i’ve gotten used to this the way i’ve gotten used the things in my
apartment always being different when i come back due to the number
of people coming in and out. i just don’t blink an eye.

i’m at home right now, jason webley is staying here, we played in
portland last night.
i hadn’t played the piano on stage in a long time. i felt rusty but
creaked back into action well enough. there was some snafu with my
keyboards not being fixed so i started the set off with two broken
notes.
something was cosmically against me (or else i was playing harder
than usual) but by the end of the show there were 8 broken keys. i
could barely get through a song. there’s nothing romantic about it,
you don’t get the satisfaction of a guitar player with the springy-
sprangy look of strings splaying everywhere. every song ends up being
an intellectual obstacle course instead of an emotional outpouring
and that plainly sucks. in trying to describe the feeling to the
audience, i tried to come up with an apt metaphor and finally hit on
this: starting a song and then realizing that the main notes you need
are broken is much like when you’re driving a car in an ice storm in
the way left-hand lane of a highway and the entire windshield fogs
up, leaving you only a few 3×3-inch patches through which to figure
out where the fuck you’re going.
but playing together with jason, and watching him play, was joyous in
itself. i could forget the fuckshow of my life and take comfort in
singing some new material, which we had a great deal of fun putting
together on the drive.
he’s one of the best songwriters i know.

tonight we play providence and then i spend the next two days trying
to dig out of the pile.

so that things do not end on an entirely sour note, i will include a
recent self-portrait that made me happy: 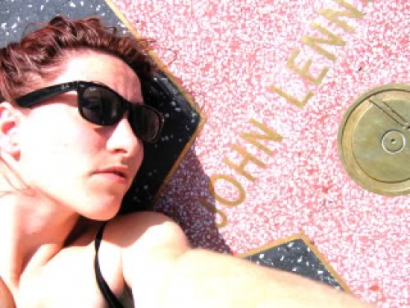