life here at my parents house has become a wonderful blur.
i’m pretending that i don’t have any work to do, artwork to make, business to deal with or email to answer and that watching the entire two seasons of twin peaks is actually an important, nay, CRITICAL thing to accomplish.
i’m getting there.

i have been going for silent walks with my loved ones.

today i went for a walk and i cut through lexington center.
i love lexington center. this is where i grew up and shoplifted as a youth!
the skateboarders in back of the bank, etc.
except the skateboarders have been permanently banned from behind the bank. they’re supposed to skate in an ACTUAL skate-park that the town BUILT using thousands of town tax dollars.
i don’t understand.
don’t they get that building a skate-park for frustrated teenage boys – who want to very purposefully skate their angst away in public parking lots – is dead wrong, it’s like the worst kind of insult?
it’s remind me of bansky’s wonderful stencil. 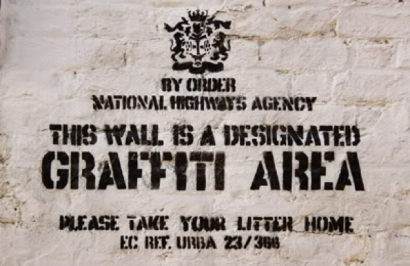 anyway, it was a half-day (thursday, school lets out at noon) and there were millions and millions of tadpole-like middle-school kids all sprouting around, being all high on sugar and cellular technology and generally terrorizing main street with their deafening cries.

i listened to a few of their ramblings and shoutings as i passed by their groups. it was insane, they’re all talking incessantly about shopping, money and brand names. and they’re, like, 11.

however, i think i remember this being the age when i was at peak insecurity. that was the era of swatches, guess jeans, benneton, forenza and whatever the fuck else and NOTHING ELSE FUCKING MATTERED.
if my OUTFIT DID NOT LOOK GOOD AND I DID NOT HAVE COOL SHOES, I WOULD DIE. i really, truly, clearly remember the feeling. it was a strong sense of purpose, to shop (or shoplift, in my case) for the desired items in question was a kind of be-all-end-all of existence. seriously. those years were hell.

all of the junior high school girls were wearing jeans, bling t-shirts and Ugg boots. they look like this. i have to talk about this, it;s been bugging me for a few years, since i noticed (at airports is where i mostly pick up on what’s trendy, since there are always high-fashion chicks in line at security, and you can stare at them).

what is up with this shit? is it just me, or has fashion recently gotten ACTUALLY UGLY? legit ugly?
i think people felt this way in 70s – those with common sense were like: I aint’ putting that shit on my body. go away with your bell-bottoms and shag hairpiece.

i think it’s happening again. the big sunglasses, the ugg boots, the flared jeans, the velour matching sweatpants.
it seems like a cruel joke on the part of some fashion-designer-in-the-sky who wanted to see how far he/she/it could take this joke.

…that these are bland bedroom slippers, staple-gunned at the bottom for reinforcement?
i googled. they cost about $150. i don’t know. i feel crazy. whats going on???????
it really feels like someone is laughing. i will not waste any more time on this topic.

from comments:
How about lip-gloss and overall at the same time? Posted by Psychodelicategirl on Wednesday, March 05, 2008 at 10:41 PM

how about lip-gloss and nothing but these hideous things:?

so a man staggered toward me a few nights ago downtown, looked at me and said, “excuse me, am i going the right way?” I looked in his eyes for a second and quickly answered, “yes, you are.” he thanked me and continued to walk…
these kinda things really make you wonder… where are we going?
ps. i absolutely love that you exist. Posted by LYNZ on Wednesday, March 05, 2008 at 10:57 PM

i, in turn, love that you exist. where are we going? to lexington center, of course!, for absolution in the blood of the middle-schoolers.

For live use the Shure Beta 87 is highly recommended to allow better clarity at lower volume.
It’s a condenser with a 10 kHz boost and a sloped low cut filter for reduced popping of P’s and B’s.
A multi band compressor such as the Drawmer S3 may also allow you to preserve your health while still giving the audience everything.

yes, yes. yes. this is the microphone i use, wise man. i recommend. one of these days i need to do a tech/geek blog about all that shit.

i have a sort of serious question,
did your insurance cover the operation…. is there like a group plan for rock stars?.. do rock stars have insurance?
just a thought, Posted by The Debutante Massacre on Thursday, March 06, 2008 at 2:33 AM

thank you for asking. insurance is a fucking joke in this country, as we know. the answer is: no, virginia…rock stars do not have insurance. once my rock band got to be big and huge enough and we felt we could afford it, we turned into a business, employing me and brian the drummer as. we then bought a group plan to the tune of several hundred dollars a month per person. and no, my insurance did not cover the whole operation. i paid for it with a credit card and will have to submit the bill to the insurance company and pray to god i get paid back. the insurance did, however, cover the hospital costs. but not the surgeon. i am glad you asked this, because a friend of mine named jasmine just started a great organization called “rock for health” and they address exactly the “why do no musicians have insurance” issue. go visit, learn, and give them money and energy if you can, and from the look of their site they’re going to be at sxsw in austin next week, so if you’re there, give them a hug: http://www.myspace.com/rockforhealth

i can empathize. i got my tonsils removed last year. it was not a jolly week. but you’re doing pretty damn well, i see.
now this is something i thought you of all people could figure out. i have to kick arse at a symposium organized by my university (where nepotism is the thing i struggle with on a daily basis). the theme is “cultures in transit”. please suggest a topic! i’ve picked my brain for 48h and still haven’t find the right one. just scribble anything that pops up in your head. something that can throw those bastards out of their chairs.
Much love,
Soso Posted bySoso on Thursday, March 06, 2008 at 10:03 AM

“The Impact of Environmentalism and Post-modernism on Pre-teen Footwear”

SSSSHHHHHH! Day #3. Have you spoken yet?

funny you should ask. i fucked up the other night. brian was over to watch the family movie and i totally forgot i was supposed to not speak. the movie ended and i poked my mother in the foot to see if she was still with the living. she didn’t move. i turned to brian and said “she’s out like a light”. but it sounded more like “sheheheh uout likekekliggh”. i realized i’d fucked up before the end of the sentence and we all agreed to pretend it hadn’t happened, all exepct my mother, of course, who continued to be out like a light.

these boots would make an excellent album cover

one last word on madonna?

oh god, this is the lonely at the top discussion i have been wanting to avoid for years. but really. i think you’ve hit another nail on the head with madonna and the feminism issue here. BEING IN COMPLETE CONTROL does not mean that you are a powerful woman, or person. it reads like a sign of weakness, of non-humanness. when madonna defended herself however-many-years-ago re: the “express yourself” video by saying “but I CHOSE to TIE MYSELF UP! NOT SOMEBODY ELSE! I’M THE ONE IN CONTROL HERE!” it just sounds so fucking terrible. this is not what i want to look up to. i am spending a lot of time harshing on madonna here, but the points being brought up are valid. i love her, love tons of her music and have been shaped by her to god knows what extent. huge. but i don’t think of her as a powerful role model, not in the THATS-the-way-to-do it way i crave. she seems to be trying too hard to truly BE in control: a lady-doth-protesteth too much situation. in fact, thats the thing that makes me crack when i see it, that makes me not buy it. when i see a woman with a hard, fuck-you-i’m-in-control-here exterior, it’s just as much of a turn-off as when i see it in a man. i don’t want to see ANYBODY like that. it’s a cartoon and i don’t believe in it, because i TRULY BELIEVE THAT NOBODY AROUND HERE REALLY KNOWS WHAT THE HELL IS GOING ON!! if you’re acting as if you do, you’re LYING. that includes you, madge.

thats all i have to say from tonight’s mute pedestal