mother of fuck.
home, about to go to bed. but WAIT
the celtics won the basketball world series and it sounds like there’s a full-on riot going on outside. car horns blaring, people making hooopy animal sounds, and now helicopters. it is times like this that i find myself very torn about a) living in the city and b) being a human being. i’m sort of embarrassed for us. and i’m also jealous of people who love sports.
it’s seems so easy, you have something concrete to get excited about, and you have something in addition to the weather about which you can prattle on to your fellow strangers.

i’ve been at home.
since tour there’s been a whirlwind around my head and i’m, again, not really quite sure what i’ve been doing. id have to look at the calendar. my brain is fried. and it’s loud outside. i know i’ve been finishing the record (i have, indeed, been “finishing the record” for about sixth months now…it just went in to be mastered for the FOURTH time).

i know i’ve been trying to get ready for the shows with the boston pops, which are going to be in two days and also going to be incredible. i’m a little scared. i hate practicing. i am frightened of the many real people in the orchestra who all show up the day of, look at my music, play it without ever having seen it before during rehearsal, go get a sandwich, then play a huge show with me. it’s weird. i want it to be good. i am trying. i’m doing so much WEIRD and new stuff for me. you’ll see.
i will write about it.

i know i’ve been working on the album artwork. i am used to this process being long and arduous. i’ve gone through 3 or 4 completely different concepts and finally hit one that stuck. and now is now, so that’s what it is. i don’t like imagining that i have to present myself to the world on a 5 inch by 5 inch piece of cardboard. but i do. so i stress it and try to make it as perfect as possible. that is how i do it.

they are still yelling outside. people in heat. it’s getting louder. the horns are blasting. there’s whooping. it’s getting frighteninger.

i’ve been trying to picture my life from here on out. it’s very blurry and yet very exact. i know that i’m about to leave home and get on a ride that wont stop for about a year while i tour around the world promoting this thing. but i want to. i’ve never been so proud of something in my life. i want to eat my record.

oh, wait. no – now i remember.
last week i shot videos with pope. (for those of you who don’t know him. he’s my dear friend, ex-housemate and also directed most of the dolls videos and paradise DVD).
we took 5 whole days and blocked them off and made 5 videos for the record.
all very low-budget, all very simple. just a small idea, pope and a few cameras, and me, trying to act convincing. i think it worked. pope is going to send me the edit for the first one tonight. we’re then going to start putting them online, one by one, until the record is out in september. it’s real. it’s starting.
the first song is going to stream on myspace next week. 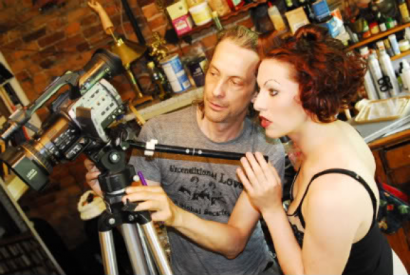 i was going to take an ambien to go to sleep (i have a radio thing at 8 am tomorrow) and now i don’t even think it will work through the noise. we’ll see.
hang on.

ok….they’re rioting. i wonder, really, how long they can keep it up.
while the ambien kicks in, i will keep typing. i assure you, things will start to get tyop-y and weird. as i drop to the floor, i’ll hit send.

being on the set again with pope was good for the soul. i am reminded that working with people you like and who like you is the key to happiness.
our schedule became so regular that it felt like i had a job. wake up, get onto the set, make videos all day, finish at 10, go to the bar with the crew, order beer, unwind.

all the while, i was trying not to notice that my computer had crashed and was sitting inert on my desk, waiting to be saved. i finally took it into the mac store (they’re very nice at the mac store)and about 3 days later (as i paced outside the video set like the waiting-room friend of a stroke victim about to hear the doctors pronouncement) found out that my mac was unsalvagable. the last time i’d backed it up was two months ago. i lost an extraordinary amount of work and a ton of photos and all of my mishmash organization (i organize my entire life inside mac Mail. which means my mail lives on my machine not online. which means if my machine crashes, i lose tons of shit). i found it strangely liberating. i toyed for a few days with the novel idea of becoming a new person.
there’s a line from a song by guided by voices that i just fucking love. it goes:

and i think everybody knows this feeling. some small event or object inspires you to just give up and start over. change wardrobe. re-name self. start carrying pocketwatches or wearing moustaches. that kind of shit. its always tempting. i decided for about a half hour that it might be better off being one of those musicians who just doesn’t email or answer anybody’s shit. i could pretend the internet was a distant memory, let my managers decide what my website should look like, let other people worry if i had posters at my show or not.
i might even start writing music again.
i realized recently that i haven’t written a new song in over a year. that’s a record. it scares me.
it’s funny. i got an idea for a song the other day and as i came into the apartment i found myself thinking “sit at piano? write song” and the immediate nasty comeback in my brain:
“no. don’t write song. let idea rot forever. you have a record coming out in 3 months that you’re going to be touring on for a YEAR. why do you need more songs, fool?”
this is the kind of twisted logic i live by. the truth is i actually just don’t like work. i really like getting ideas. i just hate everything that comes after that.

the sonic kaleidescope continues outside. i really wish you could hear it. it’s like a cross between a rave, a parade, and a terrible, terrible traffic jam.
motorcycles are revving. men sound like they’re dying. if i had the energy id go out and watch.

neil gaiman is working with me on the book that is going to accompany the record. he’s also writing some liner notes for the back of the album art, which is taking a bizarre turn into the 1960s.
he’s an amazing man, this neil gaiman. (the ambien is kicking in). he is kind of a rock star trapped in a writer’s body. i like the way he talks about things, it makes me feel like i could spends hours and hours with him and never get bored and never stop laughing and never forget for too long the profundity of silliness. i feel so lucky. all of these incredible people have come into my life lately. neil gaiman. ben folds. beth, my assistant who is helping me save my life so that i can go tour in peace.

time to go to bed. i think i’ll enjoy these sounds much more from a supine position…………………..

p.s. if you’re coming to the POPS shows, try to take illicit footage without getting caught. i’d love to see this stuff wind up on youtube.

p.p.s. here’s a little clip of me rehearsing at symphony hall