PHOTOSHOOTS GALORE & ONE WEEK TIL TOUR! (it rhymes. it rhymes! it rhymes some more!)

sleep is in low supply.

i’m going to cross-post this one as a backer-update and a blog. i’ll be reading comments in both spots.
if you guys are at all annoyed by this, let me know, i think for updates like this, it’s the best way. 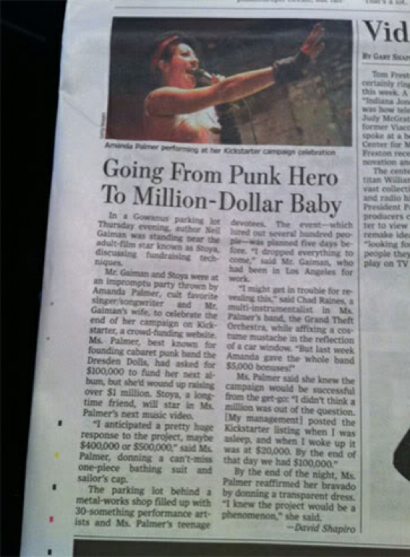 UND
this week is REHEARSAL week in new york city.
spending time making music.
seems like such a strange and novel idea.

we’ve busted out TWO EPIC photoshoots lately, and now that we’re done jumping up and down writing your names in a phonebook and reeling from the effects of the kickstarter, it’s a good time to show you what the hell we’re doing back here.

SO, our first shoot was with the amazing Kyle Cassidy, who many of you guys know as a longtime AFP/Neil/Dolls go-to photographic genius.
he also has an awesome widely-read blog and a great twitter feed…i recommend.
ryan anas (@estrellamar) was our jesus-like photo assistant, and the makeup was done by christine geiger.

for this shoot, our loft hostess and costume coordinator (she basically loaned us her ENTIRE CLOSTER for the shoot) was larisa fuchs aka @gemini_scorpio of geminiandscorpio.com
sound familiar? mais oui, it’s the same brooklyn loft we held the countdown party in.
here’s us, raising her up in all her beautiful glory, just after kyle shot us in her loft…. 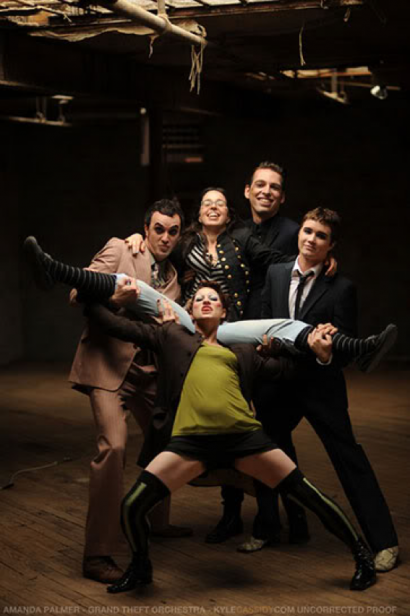 larisa is a handy, handy gal and in addition to letting us rifle through her entire head-dress and kimono collection she ALSO hooked us up with the amazing shoot location, right down the street from her house, an INCREDIBLE warehouse called Film Biz Recycling (@FilmBizRecyclin)
it was started in 2008 by eva radke because she wanted to stop the waste created in many of the tv and film productions in the area. since then, the company has diverted 263 tons from nearly 1000 productions of unwanted building materials, set dressing & wardrobe from a ghastly fate – dumpster to landfill. as you can imagine, i wanted to basically move in. it was A WAREHOUSE OF PROP CHAOS!!! they had an entire shelf devoted to fax machines from the eighties!!! it was a super-friendly joint, the staff loved having us, and the shots were brilliant….here’s one: 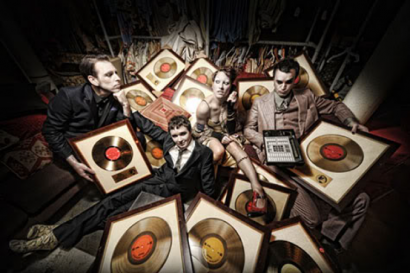 those gold records were literally stacked up in a pile in the corner and i yelled WE HAVE TO USE THESE!!!!

the funniest thing about them is that they’re NOT EVEN REAL records…those are color paper print-outs of gold records, in real frames.
hilarious on so many levels i can’t even start.
i love michael’s face. 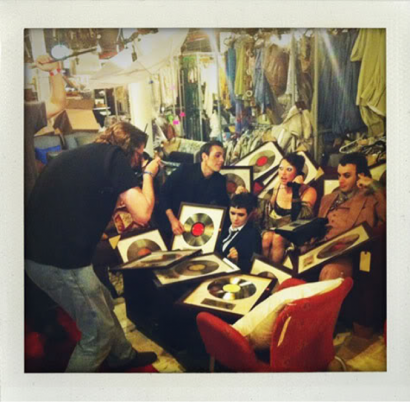 YESTERDAY/SATURDAY we did a MARATHON 14-hour shoot at an almost impossible-to-describe spot in new york called The Black Apartment.
i found it through twitter when i was asking around if anybody had any good shoot spaces, and someone put me in touch with @cindygallop, who created it (and LIVES in it, like a magical ballerina in her own black-lacquered chinese music box). i googled the place and saw THESE and couldn’t believe my eyes. it’s clearly called the Black Apartment for a reason. (photos via behance.net) 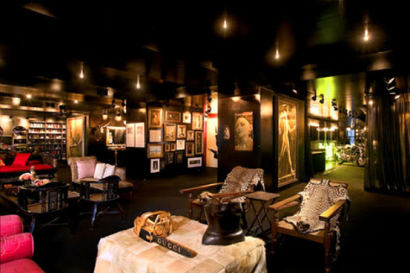 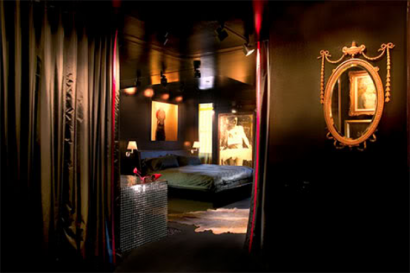 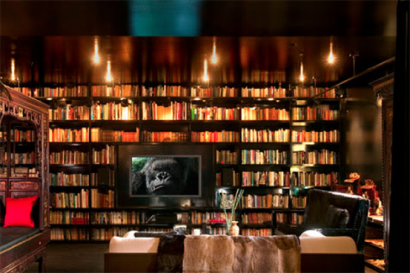 bonus factoid: it was used for a NOTORIOUS BIG video shoot (for “nasty girl”).

makelovenotporn.com: i suggest you check it out, and i may or may not have promised to give her some real-life amanda sex tapes. (neil gaiman would like the assembled backer and blog readers to know that these tapes will NOT include him. nor should they. our sex life is ours and intimate and is not for public consumption. however, my sex life with, say, pole-dancing alt-porn stars is entirely available to the public).

i won’t spoil the surprise….but we took HELLO photos and here’s some behind the scenes shots of the band.
the photographer was shervin lainez/@ohshervin (and his lovely assistant, kristen winter/@kristenbillie).
we got a stylist named rich aybar to scare up a bunch of amazing dresses and suits and stuff to dance around in…
though the boys wore most of their own stuff and i brought a huge bag of my own clothes. plus….naked. of course.
superkate and our awesome publicists sarah and dana ran around helping us organize crocodiles made of gold and dripping fake jewelry and martini glasses and made sure everybody ATE.

chad got the TROOPER OF THE DAY award and shaved his pits. amazing….
photo by @_superkate_: 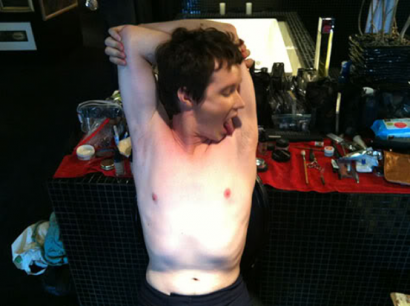 here’s jherek (@jherekbischoff) getting DONE UP (i took this): 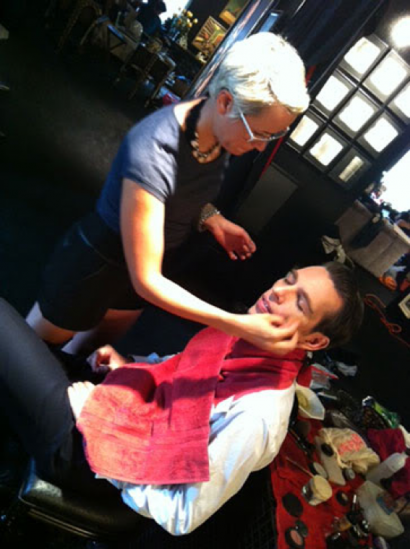 the hair was done by erica zimmerman/@d2kclothing: 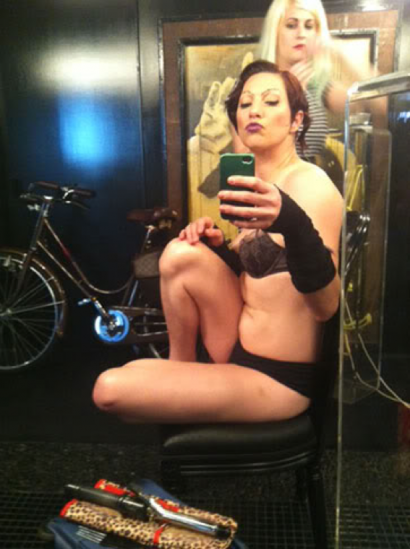 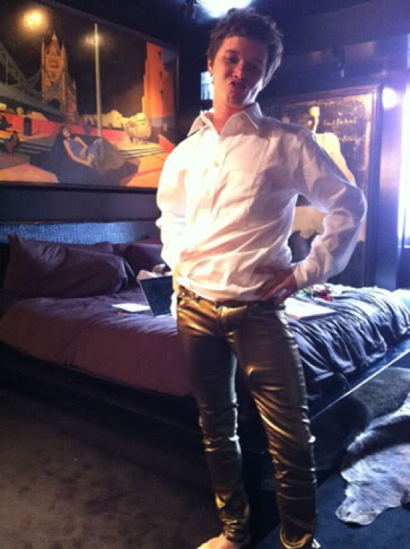 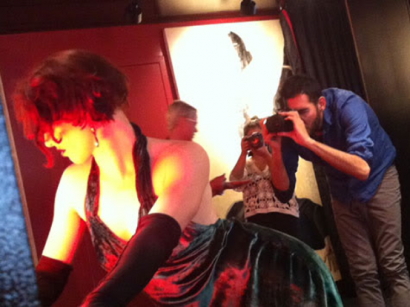 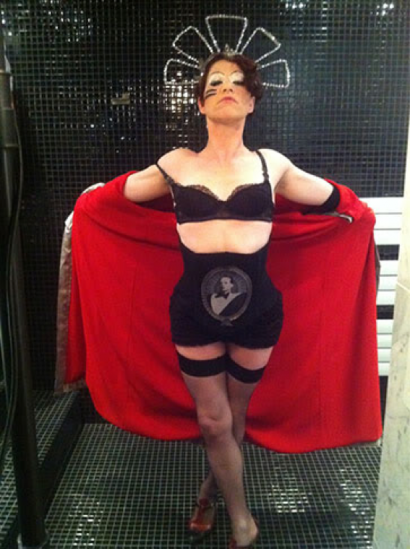 yes, you have it right.
THAT’S KLAUS NOMI.
those who don’t know….GOOGLE. he is A God. and perfect to be our spirit animal on this fucking tour.

the corset was created by louise black (@louiseblack) especially for us, “cameo corsets” are her specialty, and she and i were really excited to finally collaborate on something, along with jess, whose magnificent tour costumes you’ll need to WAIT TO SEE….but the headdress i’m in and the kimono whose living you see on view here are merely the beginning..

i’ve been slaving away this whole while to get the ART BOOK, CD, and LP off to the printers.

we wanted to wait until this shoot was over to make sure there were no photos left UNUSED!!!
and it’s looking fucking fabulous.

i can’t wait for you guys to get this shit in your mailboxes in a few months. i hope you all SCREAM with delight.

our first show is in berlin in about ten days.

this was the band, today, in our rehearsal space in midtown….

trying to decide WHAT SIZE GONG WE SHOULD BRING ON TOUR THIS FALL. 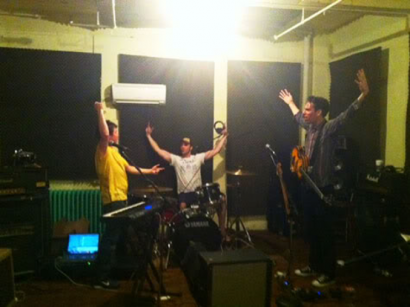 i twittered this, and it was discussed whether a ten foot bong was more appropriate.

or a ten foot dong.

i’m thinking: if we bring all THREE, we can get super stoned and then hit the ten foot gong with the ten foot dong.

the sound will make us see GOD.

p.s. here are the lyrics to WANT IT BACK, since you all asked.
don’t ask me. some of this shit doesn’t even make sense to ME, it just….came out that way.
i’m glad you all love the song. there won’t be much more music released until the album comes out, so ENJOY.