just landed in moscow after a night train, after a few days in st. petersburg.

russia is a strange place, as all foreign places are in the literal sense, but usually i love different. i don’t love it here yet.

it’s amazing how you have such limited experiences of a place and then that’s it. that’s your impression.if you wind up in a few shitty restaurants by accident, due to poor planning, you’re just screwed. this is sort of what happened to us in st. petersburg.
i was mostly just tagging along with jason webley (the reason i’m touring here, he knows his way around since he’s toured here about 8 times), who was mostly just tagging along with a gal supplied by his russian promotor, who was mostly just a ball of nerves because she wasn’t actually from st. petersburg and always thought that the world was about to explode/end for some reason or another.

we did manage to peek into some interesting looking joints and do one really really long walk (and one historic one-hour dash through the hermitage before soundcheck) between the slapdashness of it all.
but the city, the great and beautiful a city of st. petersburg – i somehow missed it.

that happens. being on tour, i’m used to it. i forget how to do travel like a normal person sometimes. what’s normal? no idea, actually. fuck it.
i always feel the same way about berlin….i always arrive and tool around and leave feeling like i never actually landed anywhere.
there’s also an imposing quality to everything, the hugeness of the architecture, the default sobriety of people’s faces.

russia also has some children, i know because i squeezed next to two of them in a volvo. 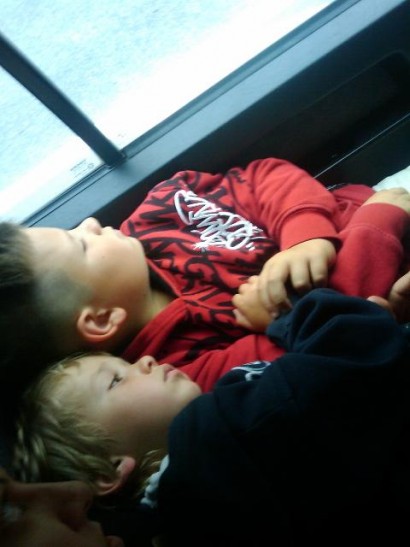 they belonged to stas, who had full sleeves on both arms and shortly after this idyllic picture was taken, started to crank obscure 80s psychobilly songs for jason who was sitting in the front seat.the child in the red promptly started beating up his brother. peace is always short-lived.

the humorlessness is exterior, i’m told.that much i’m used to – i did live in germany for a year. in bavaria, ikes. not a lot of smiling going on there. smile at people on the street and you’re bound to get questioned by the cops.

i already feel different about moscow even though i’ve only been here for a few hours. maybe it’s my mood. maybe it’s the ions in the air. maybe it’s maybelline.

here are some pictures from st pete, which i had a really fun time taking because i am getting acquainted with my new iphone camera. the iphone is now winning, handsdown, over the g1.sorry google. the keyboard on the iphone is definitely a pain in the ass but it’s all worth it to play with my brian eno app every time i need perspective and calming (if you have an iphone, get it, it’s called bloom.)

here’s me, jason, and his back-up band, who i am borrowing for all these shows.we literally rehearsed for two days in a train cargo car. it felt very soviet and punk rock.from left to right: jason, romo (bass), masha (violin), and vladimir (otherwise known as “big”. he’s big.): 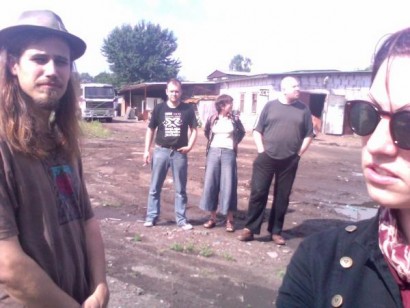 vee all liff in a yellow supmarine……. 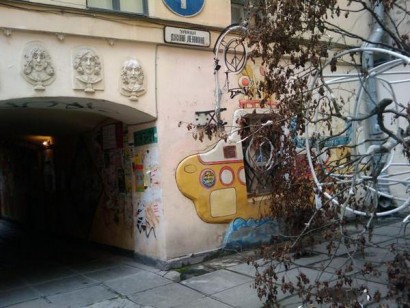 we had a beer meet-up with the journalist/photo-journalist Sergey Chernov from the st. petersburg times (who had written THIS article to promote the show).
he had just come from taking some photos of a small demonstration down the river where some punks were hanging an effigy of a policeman. the backstory has something to do with a neo-nazi cop who assaulted somebody and got off scott-free.
i took a picture of his picture. the pink-haired punk chick on the right is hanging the dummy over the railing on the banks of the neva (i think): 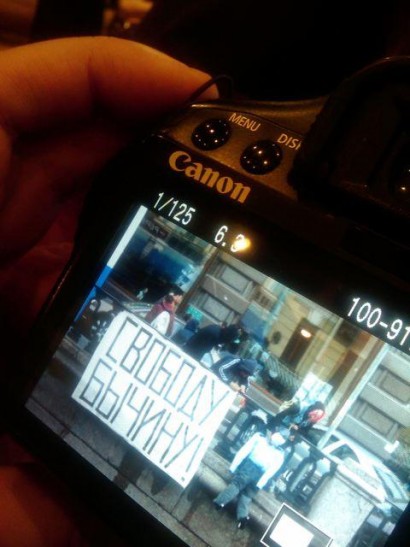 this was a sandcastle i found across the river from the hermitage: 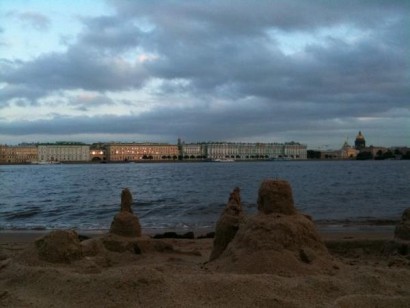 the hermitage is one of the biggest and oldest museums in the world (wiki tells us: founded in 1764 by Catherine the Great and open to the public since 1852. Its collections, of which only a small part is on permanent display, comprise nearly 3 million items, including the largest collection of paintings in the world.)
according to max, if you spend one hour in front of every work of art on display at the hermitage, you will be there for 11 years.

i, for one, liked this sandcastle installation across the river better than the picassos and matisses at the hermitage.
the sandcastle was more artistically relevant. and ephemeral.

and max, by the way, just tweeted that he’s applied for a job at the funeral parlor down the street….position: Trainee Funeral Arranger. wish him luck.

this is the chocolate museum. we walked by, we didn’t go it. the lightings bad, but if you peek to the left, you can see the life-size chocolate venus de milo.
jason was considering breaking in and licking her but we thought better of it. 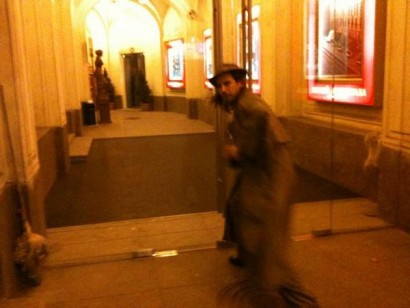 our show itself, which was a joint headline gig with jason, was brilliant…about 600 people showed up and we did a full-band version of “billie jean”, including jason and i attempting to crotch-grab/moonwalk.
i signed many autographs and hugged many russians. 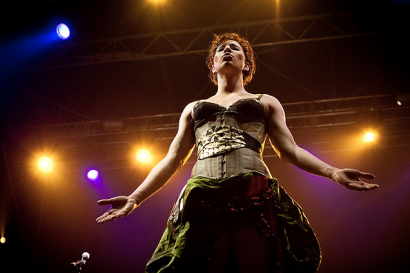 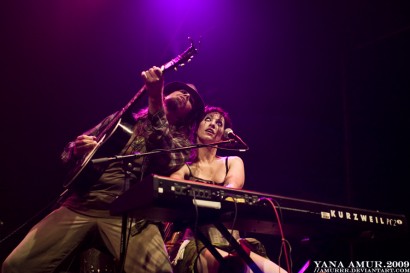 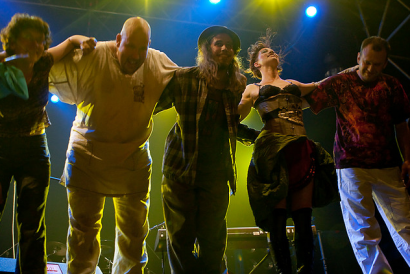 the sky here stays lit until late late since we’re so far north.
this picture was taken at around 10:30 pm.
the iphone astonishes me: 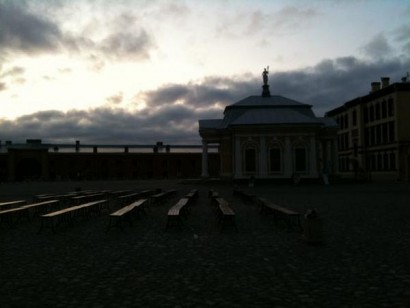 this was my favorite moment at the hermitage….the photo does it no justice. it’s a thin-metal sculpture of a cathedral-tractor. cathedral-tractor is a good band name.
no matter which way i turned the camera, there was not a perfect shot. here’s my sad attempt, but it was one of the most beautiful pieces of art i’d ever seen: 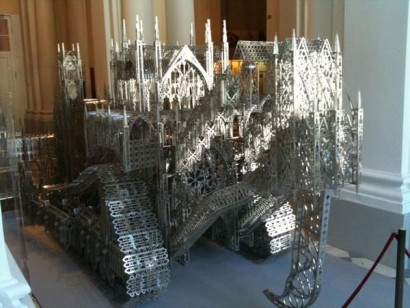 and here’s an official picture from the hermitage.. 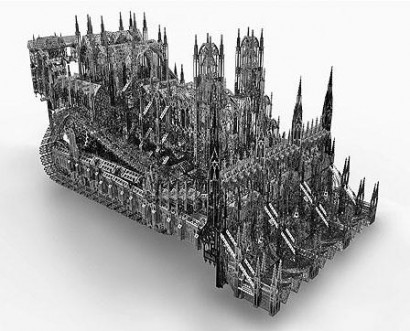 it’s called D11 (scale model 1 : 2.5)2009 Wim Delvoye Laser-cut stainless steelApprox. L 450 x 190 x H 184 cm
sleeping in a train overnight is one of the cosiest and most wonderful sleepings. it’s like sleeping in a tour bus (which i’ve actually grown to like – it lulls) only smoother and with actual light from the sun.

we jetted form the gig, bought a bunch of beer at the train station and boarded the train at about 1 am. we arrived here in moscow at around 10 am.

i woke up at around 6, accidentally wonked jason with a big metal thing while going to the bathroom, couldn’t fall back asleep, and let lyrics dance around in my head to the chorus of a song i started writing back in november when i was sad and frustrated in germany in an empty hotel room, wondering what to do about my relationship. it’s been playing on the radio in my head since then but i could never find the right words for the end of the chorus, so the song has been like a drain with hair in it. i finally cracked it after letting the ideas get knocked loose by the chkachkachak of the train.

here we is, partying it up in motion: 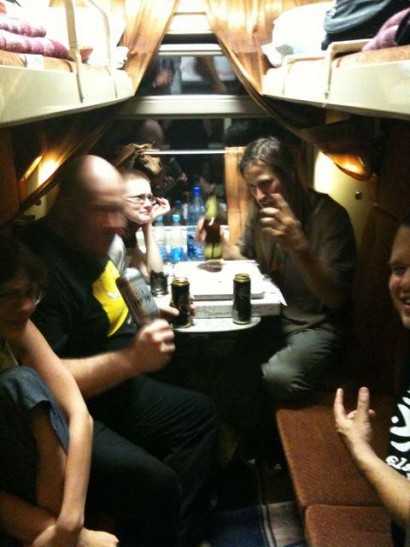 the beds, the tracks, the leftover pizza party: 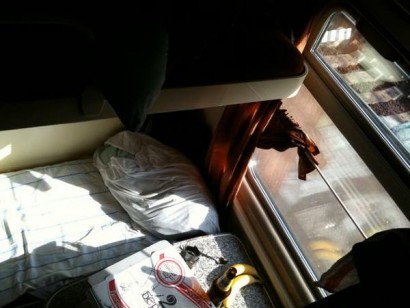 and lastly….questions from the feed and dispelling rumors:

re: the dresden dolls comeback

there’s been a ton of press lately re-printing an old quote from an old interview that’s now blown up into a full-fledged press rumour that brian and i have planned dresden dolls’ shows for 2010.not true.
we aren’t planning any shows. sorry about that, blame the gossip whores.

it’s true. according to the real ari gold, they stole his name for that character sort of sneakily. kind of a bummer for a guy who’s making their own name as a film-maker, eh? and yes, adrian is the dude from entourage and he’s also a drummer. and really cute and very smart and into environmentalism and we went on a weird date in LA this past winter. it didn’t stick, go figure. lately i’m into british writer-types. i’ll save all these stories for the autobiography i’ll write when i’m 75 and living with a bunch of cats in a yoga studio.

@Gregory9 asks …. woud you happen to know the isbn number to THE book?? 🙂 Want to see if Chapters in my city can order it. tyvm XxoxX

speaking of THE BOOK…lots of people have been sending in BOOK love. thank you so much.i’m so glad folks are loving it. i am loving it.

right now, after the UK i am planning an east coast tour of the US in november (that’s right betches) and maybe show up to do something weird in hamburg in mid september.
i’m also trying to book a singapore gig (i’ll be there with neil) in october.

ok comrades
back to the slaughterhouse