#NINJATED 2016 BLOG: The Sights! The Smells! The Astronauts! The Mythbusters! The Kites! …The BEST.

greetings from Austin, where we are getting ready to drop a brand new, full-blown original song tomorrow!! if you haven’t joined the Patreon, now’s a good time: https://www.patreon.com/amandapalmer

here’s the round-up of the #ninjaTED madness from last week…and madness it was.

for starters, we raised $16,825 for the greater vancouver food bank!!!
the great part is that with their purchasing power, the food bank is able to get $3 of value for ever $1 donated, so in fact the value of #ninjaTED’s fundraising comes out to $50,475.
THAT IS AMAZING and thank you thank you to everyone from vancouver who came out and made the party a fuckin epic one.

and HUGE thanks to sarah shandl, once again, for kicking my ass into gear this year.

it all started out with me not really wanting to do this gig, because baby.
i was headed to TED and already wondering what it was going to be to attend a conference that goes from 8:30 am to 7 pm with a lunch break.
we’d invited cassandra long (my housemate from boston) to come watch ash during the day and take him on long walks and paint on his face and stuff, but i still had no idea how it would feel, and no idea what my energy level would be, and i remember last year feeling insane and overwhelming, because i was 3 months pregnant and trying to do all this shit at once. so, yeah i thought about it and made up my mind not to do it. and then sarah shandl emailed. she’s the one i met the night before the FIRST #ninjaTED who volunteered her services as a helped via twitter without knowing who i was. and i was like: yeah. no. i’m pretty sure not gonna do it. baby. and then someone from the vancouver food bank emailed, wondering if i was going to Do The Thing again, and i was like, no. baby. and then sarah emailed again a week later, and i was like, yeah…i’m not gonna do it. baby. and then she texted me a few days before TED and was like: are you sure? i’m hanging out with some people from the vogue theater right now and they’re asking.

i must have been feeling particularly energetic that night.
anyway, i did it.

the whole concept behind the original ninjaTED was this (and it hasn’t changed): use the fact that all these amazing TED people are in town and get them to the people of vancouver, who can’t afford the crazy-expensive tickets to TED. that’s all. maria popova said, in her blog about it, that it’s like a form of robin-hooding. i’m a robin hood with a ukulele. i’ll take that. awesome.

the luckiest part of this year’s #ninjaTED was that we got to WEBCAST IT!!!!!! the guys from huzza.io, the new platform for webcasting i’ve been using, are BASED in vancouver and busted ass to film the entire show and run a wonderful webcast. the ENTIRE webcast is now online HERE (it’s like four hours….grab a bottle), but for your pleasure below, we’ve included (yes, we, billh is helping me compile this mammoth blog, thank you bill) TIMESTAMPS so you can skip to the spot in the webcast where that performer is introduced.first… I introduced everyone to the baby. it was this time last year…I played the last #ninjaTED the day I announced it. full circle shit, people. 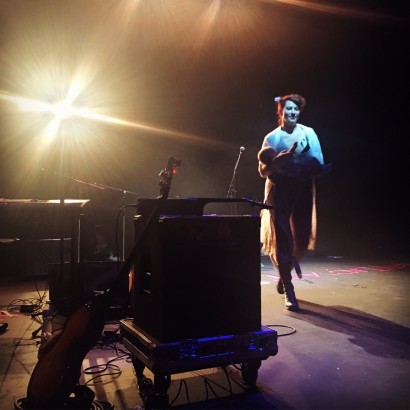 ​(photo by maria popova)
here’s the setlist (in sarah’s handwriting)…which we kinda/mostly stuck to (rhiannon was missing, and so was bill t jones, because he came on last-last-minute): 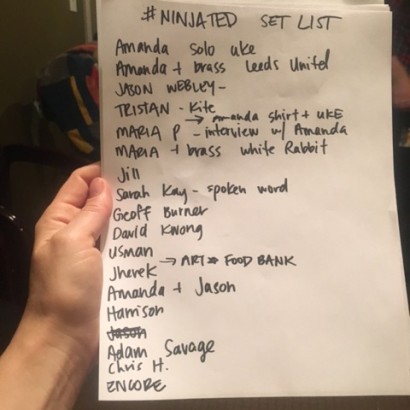 here are some incredible shots of the night by a handful of primo photographers..
here’s the vogue theater, all lit up and ready to go:​​ 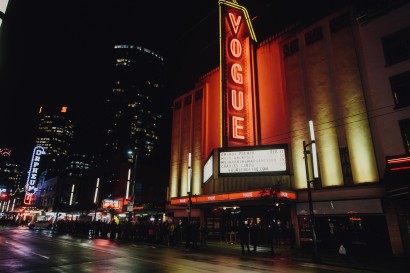 ​​(photo by taylor roades)
chris hadfield (!) and me backstage before the show, signing the epic ukulele that would later be auctioned for $3,000 (!!) 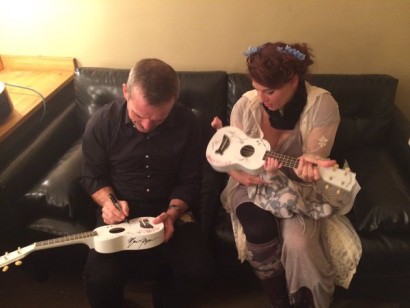 ​(Photo by VANweloveyou)
here’s orkestar slivovica. they showed up like magic the night of the first ninja TED and have been back like clockwork every year.
they continue to be AMAZING. this year we actually pulled off a few songs together….starting with LEEDS UNITED at the top of the set, after i played “in my mind” on ukulele: 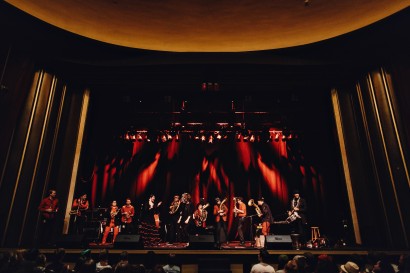 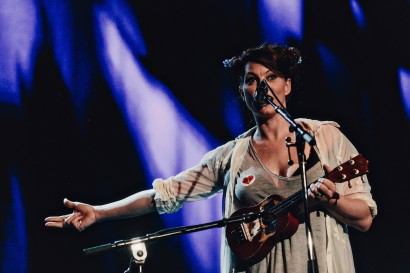 ​​(photo by taylor roades)
then jason played….he was nice enough to come up from seattle after our epic week together…. 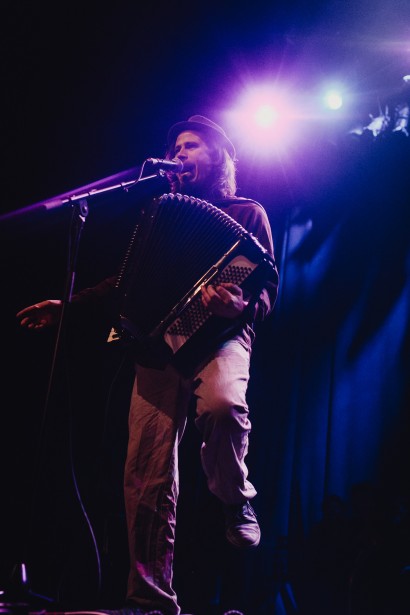 ​​(photo by taylor roades)
​
and then sarah shandl came out and allowed me to love her publicly (not pubicly! get your minds out of the gutter!) 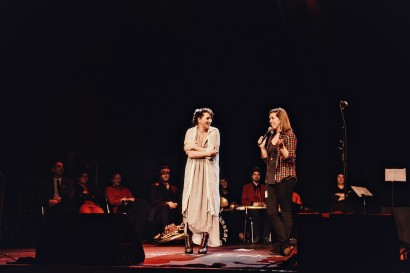 then tristan underwood, canadian national kite champion, took the stage (he came via sarah, who met him at a recent event she was helping with) 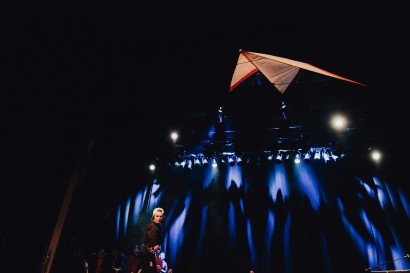 ​​(photo by taylor roades)
then maria popova took the stage and talked about alice in wonderland (thus her blog HERE), and i played “white rabbit” with the orkestar: 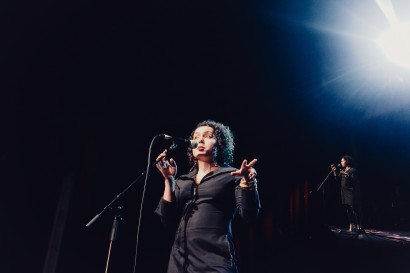 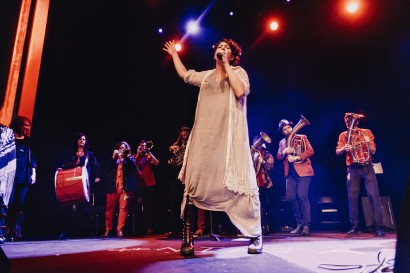 ​​(photos by taylor roades)
then jill sobule, who i know from all over the feckin place, and who was attending TED, played a couple amazing tunes, and got the audience to sing fuck: 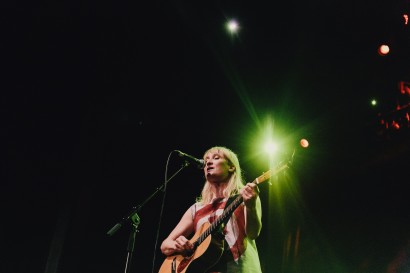 ​​(photo by taylor roades)
then sarah kay, another TED attendee, spit out some amazing poetry. she did last year’s ninjaTED and she’s one of my heroes: 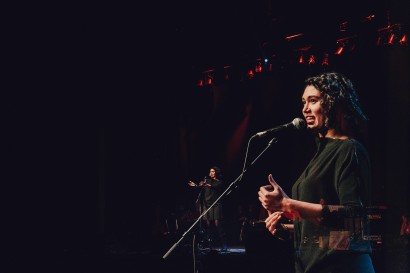 ​​(photo by taylor roades)
(and meanwhile casey was holding ash and he was sleeping for most of the show but sometimes i grabbed him and put him on my boob so he could eat.
here’s casey holding him): 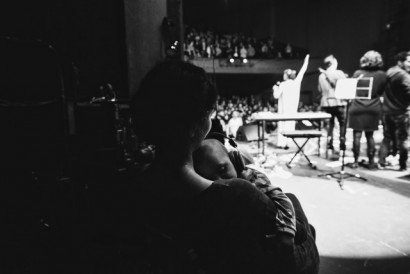 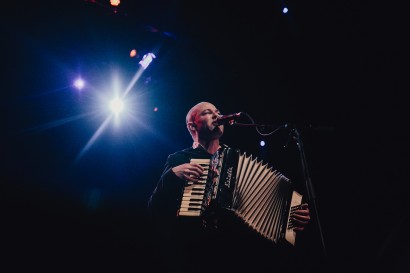 ​​(photo by taylor roades)
then david kwong, a magician attending TED who spoke last year, awed the audience with his magical skills: 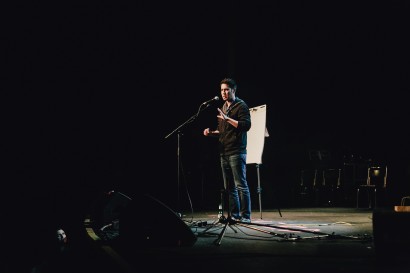 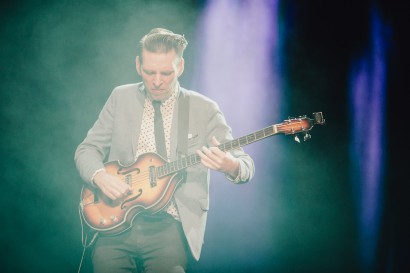 and then jason and i auctioned off the fateful ukulele…. 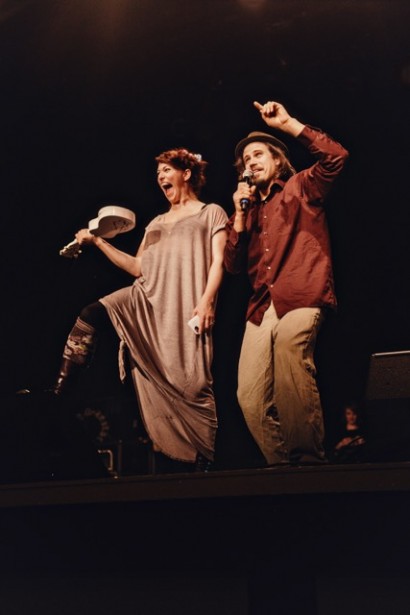 ​​(photo by taylor roades)
then jason and i played the almost 11-minute-song song i wrote like 6 days before and had just recorded with him in seattle in his houseboat (just released on patreon!!) 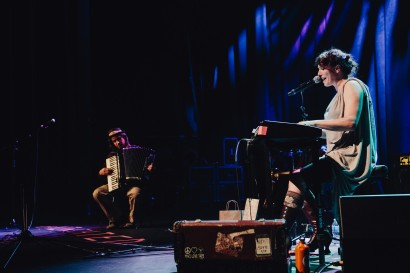 ​​(photo by taylor roades)
and then harrison lee, national canadian yo-yo champion, left us all gobsmacked (he came through sarah, too) 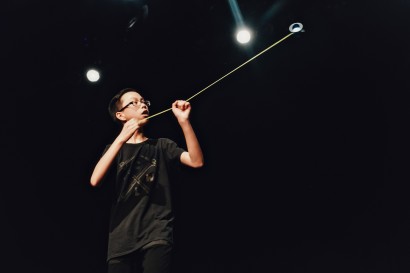 ​​(photo by taylor roades)
AND THEN RHIANNON FROM THE CAROLINA CHOCOLATE DROPS THREW DOWN WITH HER BANJO-FRIEND HUBBY JENKINS: 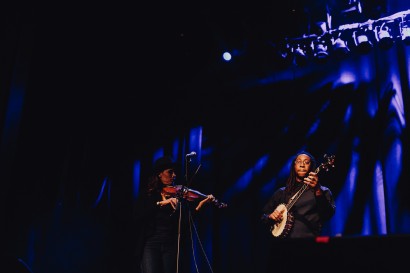 ​​(photo by taylor roades)
AND THEN ADAM SAVAGE (WHO I STOLE FROM TED) GAVE A FAKE TED TALK!! 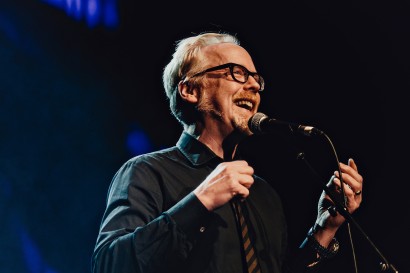 ​​(photo by taylor roades)
AND THEN BILL T JONES TOOK THE STAGE AND DID A TOTAL AMAZEBALLS IMPROV WITH ME AND JHEREK AND RHIANNON…. 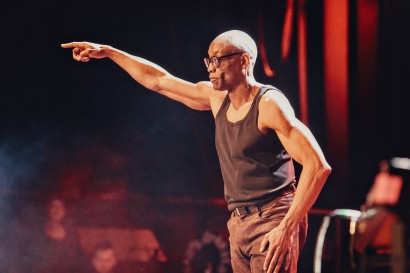 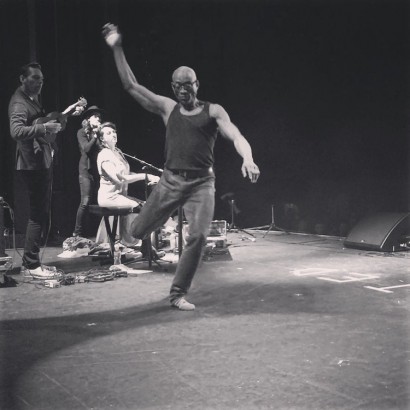 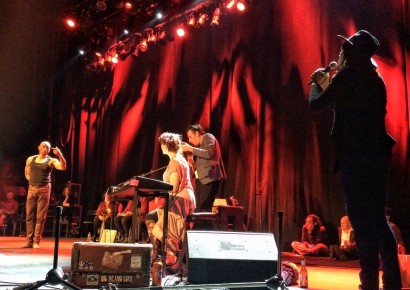 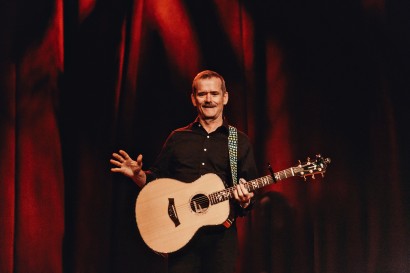 ​​(photo by taylor roades)
AND THEN JASON SANG THE DRINKING SONG AND WE ALL SPUN IN CIRCLES…. 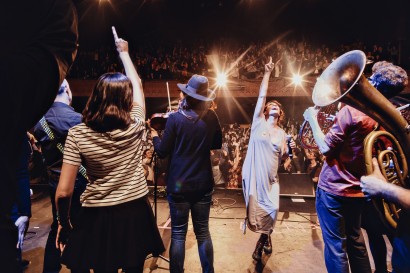 ​​(photo by taylor roades)
and then we took a group photo… 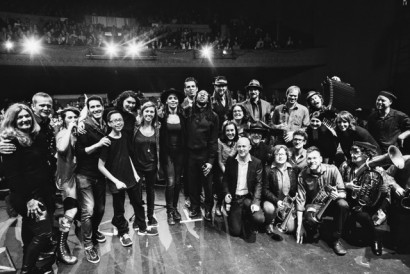