amanda at a poetry slam

well, it wasn’t a poetry slam in the strict sense of the term.

we’ve been in the studio in boston literally non-stop since coming back from tour. a revelation, exactly what i was hoping would happen.
since there’s no huge pressure to make this album some sort of definitive statement (what does that even MEAN anymore….i dunno) we just laid the tracks down, all in one day more or less.
i started with vocals yesterday, sucked because my voice was blown out from being out of practice in the studio, went back in today and nailed all five songs in under 5 hours. i’m happy now.
i would tell you the songs we’re working on but i feel some (useless?) need to keep it SOMEWHAT of a surprise.

i realize as i spend more and more time in the studio that it’s an actual skill set, and i’ve become better. i can walk into a studio and DO IT now. i know how things work, i understand how to prioritize and conserve, how to let certain things go and get stuck on certain other things. it was never my intention to learn how to do this. i always wanted to be able to go into a studio and with as little pain and effort as possible, re-emerge with a record. i’ve never been very process-oriented. that’s changing. i’m enjoying it.

sheri hausey, one of our fav boston photographers, came by and took some pictures the other day…..

yours truly getting jiggy on the hot german mic 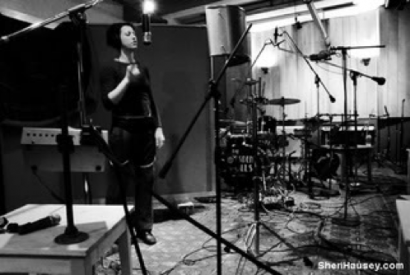 brian the intern of doom, sean slade, most well-edumucated producer in the west and benny the engineer in the control room 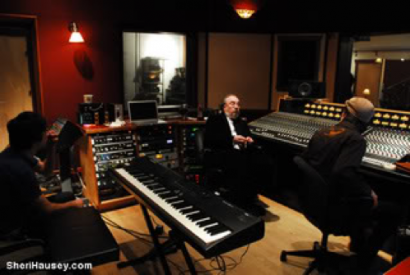 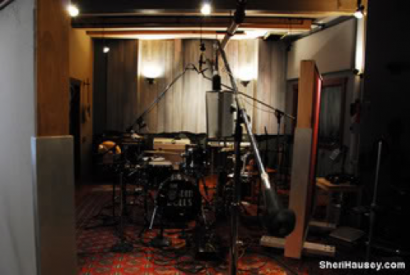 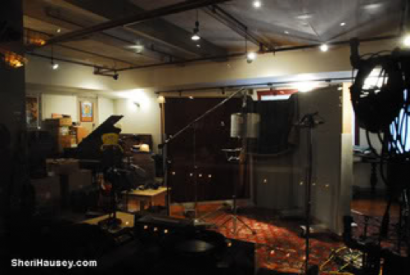 tonight i finished vocals and sean (our esteemed producer) let me off the hook while they starting piecing together some takes and edits.
i hadn’t checked my phone messages for as few days. i finally listened to them all while eating my thai food in the studio kitchen and i got a message from cormac from several days ago telling me that saul williams was doing a spoken-word show at brandeis (a university about 30 minutes outside of boston) tonight at 8 pm. i looked at the time and it was 7:45. i managed to get over there and i am so fucking glad i did.

saul williams is a fucking hero. if any of you are NIN fans, you probably know that trent reznor produced his latest record and they released it as a free internet-only download a few months ago (right after the radiohead campaign, same concept more or less, you can either download free or pay $5…hint: pay the fucking money)

i first saw saul a few years ago when we were on a bill together at the sundance film festival (random) in utah and i was just floored, blown away. we made fast friends. i remember pope being blown away too and us all pointing and going: PUNK ROCK! THE PUNK ROCK! this man is truly fucking PUNK ROCK!! fuck it! he’s a steely and hilarious and passionate performer with poetry and music unparalleled. part spoken word, part hip-hop, all sharp as a razor, he’s just THE SHIT. check out his site (and his new record “the inevitable rise and liberation of niggy tardust”) here: niggytardust.com

we showed up and the night was a long program of incredible, heavy, political/personal/bad-ass spoken-word, really well-known and insanely talented folks from all over the place. saul was headlining but the night had a fantastic family vibe. i found saul backstage and he asked if i wanted to do anything. i don’t write poems. but wait, i remembered….i DID write one. back in edinburgh in august. i had it on my computer in cormac’s car. so i went out, got it, copied it down onto a piece of paper backstage and all of a sudden i was up there, in front of 1000 strangers in a college auditorium on a saturday night, about to read a poem. saul let me cut into his set. it could’ve been way worse. i think it went well.

poetry and spoken word, as evidenced by the crowd tonight, is a fucking THING, man. it is it’s own genre with it’s own code. it’s the same feeling when you go to a hardcore show and you realize there are all these unspoken but commonly understood rules about how the crowd and interactions will proceed. etiquette. this was a spoken word crowd at it’s best…people shouting and standing up and hootin’ and hollerin’, REAL talent, searing words, hallelujah kinds poems and art jettisoning off that stage….it was a cross between a rock concert, a political rally and a kicking sunday gospel service.

people went nuts for saul and he delivered, starting his set from a balcony in the house, roaming the aisles while he spitted endless wonders out of his mouth, everybody’s knuckles on their chair edges, screams of “YES!!!” inside and outside everybody’s lips.
when i was got there, about to read my poem, i felt so out of place. i wasn’t going to measure up to all of these performers. i started to make some sort of half-assed excuses about what was about to happen and people from the audience started yelling “FAMILY!” at me. as in: shut up with your excuses. read your shit, bare your soul, you’re with family, you won’t be judged.
i did. i wasn’t. the whole experience was exhilarating and made me want to write poems. fuck this music shit. all i needs a mic, bitches! maybe i can beatbox.

as for saul, you gotta see it to believe it. i tried to dig up a good clip, here’s one. this is saul doing “telegram to hip-hop”, one of my favorites.
please watch it, so you can understand what i fucking mean:

then, go see him.
go see saul. he’s touring all over this spring to support his new record.
if you see him, tell him i said hi.

here’s an awesome clip of us doing a led zeppelin cover with two ton boa.
we decided to do this very last minute and it was a toss up between this (“immigrant song”) and “ocean song”….thus the confusion at the start.
i forgot to tell brian what the rest of the band decided.
i had the lyrics written on my left arm and if you look closely you can see me desperately trying to rock out and read them at the same time
we got volunteers from the audience to play Rowing Vikings, The Ocean (and obviously, later in the song, Heaven), A Lonesome Tree and Moonshine.
serious 4th grade drama shit and how splendid it was!!!!

Badass Prince thingamabob back there lady!
My mama gave me her Purple Rain tourbook as an apology for fibbing to me on that night in ’85 when she was on her way to see the Revolution and told me children weren’t allowed to go to concerts.

i am so glad someone noticed my prince poster. i just had to acknowledge that.

thanks all y’all for your continued feedback about release formats. all taken under advisement….

p.s. one more endorsement….sweeney todd = A+