HOW TO FIGHT NAZIS WITH TAMPONS & SHARPIES

greetings from backstage in stuttgart….i just finished. it was an epic show – although i still ran into curfew issues and had to cut the end of the show, i apologize about that – and i’m delirious and exhausted. this post is also the virtual-singing-line for stuttgart…and our patron-photos from today are down at the bottom of this post. i love you.

also. ANTWERP: i’ll be marching THIS FRIDAY MORNING for the CLIMATE STRIKE. PLEASE JOIN US. the info for the event is all here.

i decided to do a ninja gig in graz, austria two days ago…in the midst of a giant traditional-dress and beer-everywhere called AUFSTEIRERN.

they shut down the middle of the city and it’s just lederhosen and dirndls as far as the eye can see. i’m not saying that these traditional festivals are nazi. they’re really not.

i AM saying that we just found out that the day of our show tomorrow in essen, germany, is also the day that some real-ass nazis have decided to march through the streets of essen.

everyone here, my crew, my fans, are all feeling very uncomfortable about this.

when we were in graz, austria, a few days ago, we crashed headfirst into this festival.

this is a photo gabrielle, one of your handy Foreign Tour Correspondents, took: i woke up, i walked into town and saw this in front of the supermarket. that bum grab, tho.

i had decided a few days before to try to do a ninja gig in graz.

it was interesting: i put out the call on the patreon here for spots and it was obvious from all the suggestions that everyone wanted to be VERY FUCKING FAR AWAY from the middle-of-town action, where clearly all the local beer-drinking, traditional-dress wearing austrian revelers would ruin the fun.

we must GO IN.

i even got an email from a patron who knows me, and a concerned and nervous merch-queen alex coming to me on the bus telling me that some folks on the patron facebook group were upset about my choice of location.

did amanda know?
the city is a shitshow!
someone must tell her. here’s the thing i want to remind you all about me, and about ninja gigs. they are for me as much as you. when i’m on tour – i live in airports and a tour bus most of the time. there is precious little time to see ANYTHING.

i love BEING IN THE PLACE WHERE THE THING IS HAPPENING. I WANT TO SEE THE THING.

so i held my ground.

i am happy to report that it went perfectly. we all found each other at the meet-up point and shuffled, like an austro-international amoeba, to an empty spot on the side of the plaza.

the night before in vienna one of the wonderful patrons who stuck around for the photo after the show brought two tracht dirndls (dresses) and donated them to whatever cause. (whoever you are, i didn’t catch your name: thank you!!!!) jack and i donned the two dirndls and gabrielle tried one on but was like “fuck this i need to carry three cameras” so she ditched the tracht idea. 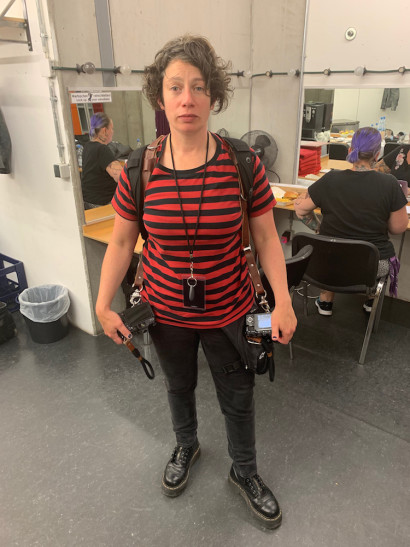 Gaby here: This is not how I normally roll. I’m a one camera kind of girl but I wanted to make sure I had COVERAGE. So I brought my strap-on and my extra lenses and by the time the thing went down, I was neck deep in photos with no time to change. But aren’t you glad I didn’t? I am. I might have missed this. (Hello AnaMarija!) i was so naïve. i thought that EVERYBODY IN GRAZ would show up wearing ironic tracht (which is, if you missed the memo, the traditional dress of this locale). in fact, it was very obvious to me that the general feeling about the tracht was not even one of ambivalence – it was more like a kind of …. embarrassment.

this is what i feel like in america when i see people wearing american flags. it’s become a kind of dog-whistle brand of apparel for rah-rah racism and superiority.

so i made a spontaneous decision as soon as i showed up ion my ironic dinrdl, given the