well goddam, if there isn’t a better excuse to take a break from book writing to go play “ukulele anthem” on stage with eddie vedder,
i dunno.

he emailed, hooray, he loved my blog-thank-you note…and he had three sold-out solo shows this week in melbourne, would i like to come play?
i heeded the call. i showed up tuesday night and we worked out a DUET of the “ukulele anthem” and played it during his encore.

i wound up with a serious hangover. it was worth it.

i honestly didn’t think the ukulele anthem could work as a duet…but we managed it – trading off lines and verses and coming up with harmonies.

eddie vedder is a truly wonderful, soulful guy. his show and his care of the audience was just fucking beautiful. he played a long set.
he’s kind. wears his weariness on the outside, calm and accepting in this way that’s almost a little sad. just a…fucking beautiful person.
i really liked him. his crew was also incredible. sweet as hell people.

his fans were also kind, though…different from my crowd. not as sloppy-loving, more held back.
they were clearly there to see him – the Man Himself – but my gauge is always how they are with the opener…and they were super-open to the opener, who was a super-human, and also very open (are we following me here?): mr. glen hansard.

i first heard glen’s music when i saw the film “once” some years ago, and the guy just fucking shoots bullets right through your heart until you bleeeeed and then he shoots some more until you just die die die. the dude can write a fucking tune and sing his ass off, and opening is a rough job. the crowd gave him space. then eddie played a really wonderful heartfelt set. he put out a solo record – “ukulele songs” – a few years ago, but his show is full of other stuff – some pearl jam songs, some solo ukulele songs, some perfect covers (including “trouble”, one of my favorite cat stevens jams)…a mandolin song. i’d attach the setlist but i think i lost it like an idiot (there’s this which seems right). we also all sang “big hard sun” together as a final closer…me and glen on backing vocals, and i played the tambourine (badly).

one thing that really moved me was eddie’s story about learning ukulele. apparently we’ve both had holy conversion experiencces with the instrument – liberated in our own strange ways. he told me before the show about how he’d been on deadline with some pearl jam songs…he was going through a rough time and wasn’t “allowed” to write anything new on guitar. on GUITAR. the ukulele – different story. that reminded me of peter and clare and how, when they got married, she told him that one condition was he stop smoking cigarettes. so he did. and he started chain-smoking CIGARS. caught – on a technicality.i din’t realize how much the ukulele had freed me until i look back at the line in my life from 2009 back to 2005 and realize it changed…everything. my songwriting, my headpspace, the way i could all of a sudden pull a ninja gig on the beach out the thin air, no piano required. it’s a powerful little piece of wood and plastic, it is.

we all hung out after the show and talked about a lot of things…including a lot of darkness.

the dresden dolls played the roskilde festival in 2005, as the festival was marking the fifth anniversary of a really horrific event: nine people died in the crush against the front barrier when pearl jam took the stage. the whole thing was a massive accident. nothing malicious, just people ready to enjoy the fuck out of music then…bam.
lives.
gone.

i couldn’t stop thinking about that sitting in the palais theater, watching eddie play. i take such weird, constant care of my fans and don’t (or rarely) play giant-ass festivals to 50,000 people…but when i do, it feels manageable and i look out and recognize the front row, i feel the people, i know so many of them, the idea of someone even getting a broken wrist or losing their purse at one of my shows sends me into a small panic. i don’t know how the fuck i could wrap my head around lives being lost. not just one. or two. nine. nine people. it haunted me then, back when brian and i played roskilde, and it haunted me throughout the set, watching him, wondering what he must have gone through, as a performer.

what i found out after the show was that glen had watched someone commit suicide on his stage. he told me about it – still hurting. it was 2010…not long ago, and a guy just jumped right off a roof, smack onto his stage, and died on the spot during his set. right in front of him. eddie heard about it, reached out to glen and that’s how they connected…drawn together through a fucked-up experience.
it really touched me, that story…knowing that was the spark that led these two guys play music together, and i was the third…it felt like a strange honor.
i didn’t want to say anything too upsetting, but i asked eddie about it, which led to a long talk between the three of us over the post-show drinks about how…weird the job is.

letting people in and out of you.
not knowing where things end and begin.
the strange things that have happened to us.
eddie had sang a pearl jam song about a stalker, called “lukin” and told the accompanying story on stage about how at one point he felt safer at a friend’s house down the road – where nobody had the address and couldn’t find him.

eddie turned to me and said he’d been wanting to ask, about letting people so close to me…how did i do it?

i wanted to cry. 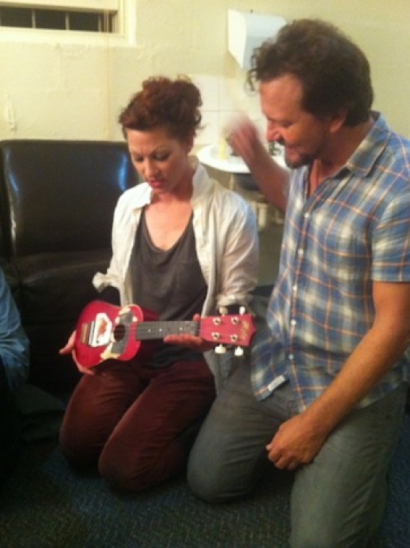 and with mr glen on the left…eddie holding my treasured $19.95 original: 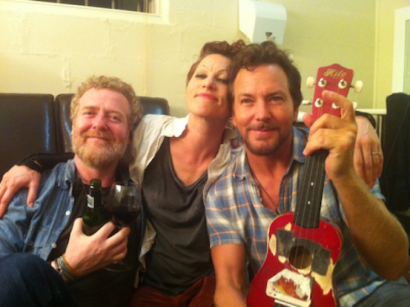 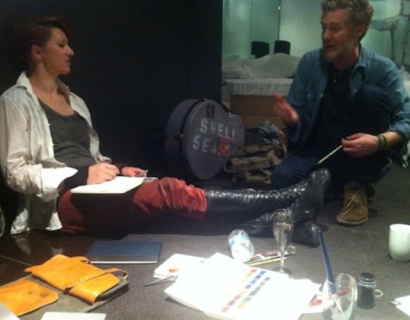 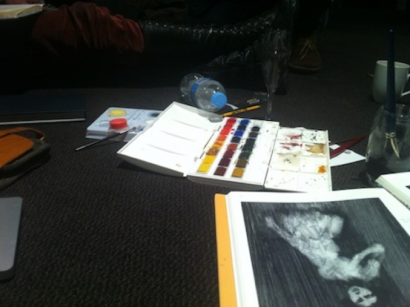 and i won’t show you part two, but MAN it got pretty beautiful ugly. the magical being taking the pictures was fiona koski, who watched this entire circus play out with great wonder and amusement…especially because she’s committed to a sober february. bless her heart. some friends are just worth keeping. they’ll take sober photos of you when you get toasted and watercolor.

the finale: 4 am and several bottles of wines down between us…glen tore out some pages from his favorite leonard cohen book – from which we had been yelling/reciting – and THREW THEM AT ME.

i felt like a real goddamn ARTIST i really did

out of respect for eddie, i’m not going to upload any of the footage from the show without his permission – he had a no video policy but we did get a rough little iphone recording from side of stage. i must say, it was nice to be in the theater with zero phone glow.

and my hangover is officially gone. thanks coconut water!!!!

p.s the book writing is going wonderfully, but i’m starting to see blurry. too many words on too many computer screens and i don’t know anything anymore. but brace youself for another round of questioning in the next day or two.

p.p.s. MELBOURNE: i shall be playing a NINJA GIG for white night. follow the twitter feed, i’ll announce details late friday. it can’t get too big, it’s in a small space in the city, a little off the beaten path. there may be a glen hansard cover in order…

p.p.p.s. i’ve been meaning to share this and now there’s just under two weeks left to pledge on kat robichaud’s debut album. you may remember kat from my blogs last year (here‘s the first). she blew her kickstarter goal out of the water in the first two days or so, but there’s still time to get on board…it’s at kck.st/KatRo