hola, dear comrades.
fuck i’m tired. i’m starting to write this on a plane to LA to do SModcastle with neil & kevin smith and do hardcore family time with my east and west coast families merged for the first time for thanksgiving. we usually do thanksgiving at my folks Dear Old House in lexington, but we’re switching it up this year. thanksgiving in LA!!! will there be strippers? will let you know.
we finished our tour in austin sunday night and played two encores and over three hours.
i completely spent myself and the party continued back at our hotel & i didn’t get to bed until about 5.
and…..god DAMN this tour was beautiful. there were so many incredible people to meet and hug and cry with and it always goes by so fucking fast.
brian KILLED IT, he’s in incredible shape. still the best drummer ever in the world, ever. some things never change.
we celebrated.
here we is. brian, psycho dave, me, casey and jaron. steven yates, who did our fantastic fucking light show on the tour, took the picture…. 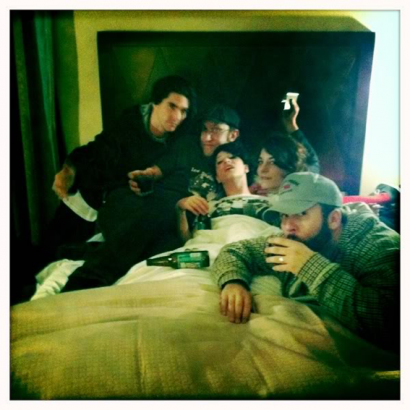 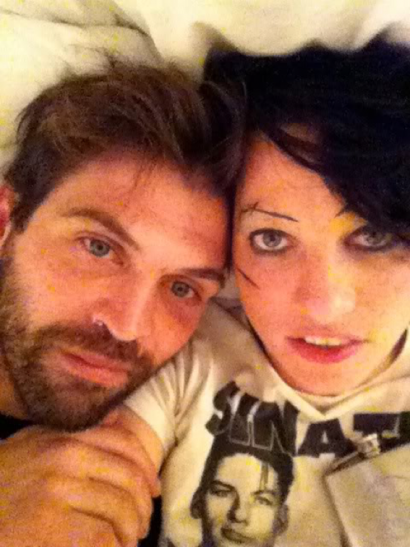 skip ahead to the monday morning, and i’m asking via twitter how many of you have experienced the evolution of the quality and arc of your hangovers as you’ve gotten older.
i swear i used to be able to fine by dinnertime after a night of IMPRESSIVE drinking. now i get hungover after four drinks and the hangovers last two days.
what the hell?
fuck this getting old shit.
i mean, i like being wiser and happier and not as young and dumb as i used ot be when i was young and dumb, but this new hangover intolerance is BULLSHIT.
also, some miscreant stole my iPhone in houston. we know it was stolen out of the dressing room, we tracked its movement away from the club using the magical internet, and the cops got involved…we’re working with them as well as the venue (both of which have been super helpful), but to no avail…yet. fingers crossed, as everything was backed up excect, very sadly, all my photos from the last month which i stupidly synced to my computer or the cloud. everything from new orleans, this tour, and the “beach” video shoot got lost…about 600 pictures. i’m slowly getting over it. i got a new phone the next morning in austin, and i’m back up and running.
if it isn’t a toilet, it’s a fucking thief. this world is full of sadness.
if you’re the thief, i’ll send you a personal thank you card and cheesecake if you can get me those photos. i do not hold a grudge. but also please stop stealing things, it’s bad.
or, if you have any leads, send them along to Us@amandapalmer.net. we’d be grateful. onwards.
in happier news, i spent one of the best days on my life on a day trip (the day of the houston show) to galveston, where many of y’all on twitter recommended we head if we wanted a beach to shoot on.
the tour was accompanied for the last three dates by the filmmaker jános szasz, who flew from hungary to texas just to shoot us.
i met jános a few months back in boston, during “cabaret”…he was simultaneously directing the mainstage production at the A.R.T. (“alice vs. wonderland”) and i was a fan of his from having seen his production of brecht’s “mother courage” about ten years ago. i saw it 5 times because my actor boyfriend, joseph (or as jános calls him in his thick hungarian accent: “JAH-zeff”) was in it, playing a teeny part as a soldier. we went out for a beer one night and within about 15 minutes i knew i would do pretty much anything to work with the guy, in any way. his energy is fantastically no-bullshit and intense. and he felt the same way – we basically had instant art crushes on each other. this happens sometimes. i felt the same way the night i first met sxip shirey.
so, i flew him over to film the dolls, and he brought his cinematographer, a young hungarian filmmaker and photographer named tamás, and they came on the tour bus for three days and documented. we don’t know yet what we’re going to do with the footage. i just knew we shouldn’t not do it.
mostly tamás shot, but here’s one of jános with the super 8…. 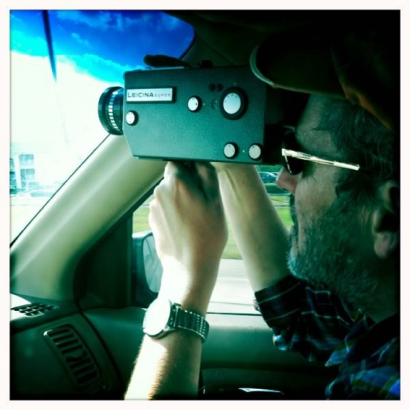 the first night we were hanging out having dinner in dallas i was telling the two of them about my australian record and how i was thinking of having a fan contest in new zealand for a filmmaker to make a simple video to one of the songs i put on the album called “on an unknown beach”, a cover of one of my favorite songwriters, the new zealander peter jefferies.
jános said (in his awesome thick hungarian accent) “amanda, we must to film this video for you.”
i did not blink and said fuck yes. i twittered from the restaurant and within a few minutes had a recommendation for a beach to shoot at, a volunteer ride, and a few offers for wedding gowns (i decided, in the restaurant, that having a wedding gown would be good for the shoot). fucking twitter is amazing. and come to think of it, we were recommended our restaurant (the grape) via twitter as well (and a dallas journalist: read his awesome observer interview, replete with many swears, HERE seconded the recommendation via text). i love that i can improvise through the world with a single phone and make shit come true within seconds. i love it. i just fucking love it.
so we played the show in dallas, and it was killer, and me & the hungarians hit buffalo exchange, a vintage shop right near the venue in houston, and bought a black dress for casey.
then, early the next morning, jános, tamas, casey (our merch girl), and our volunteer driver, mehgan, headed off to galveston beach and made a movie.
lots of people helped us by bringing make-up that i needed to the houston show (thank you!), and lots of people helped with wedding dress and veil-age (thank you!!!).
casey and i took some of the most beautiful pictures in the whole world on my iphone, and they’re gone, but luckily i twittered a few of them, and here they are: 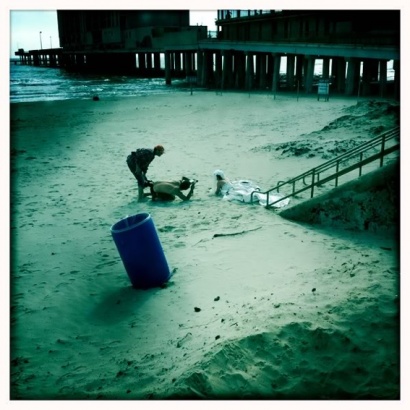 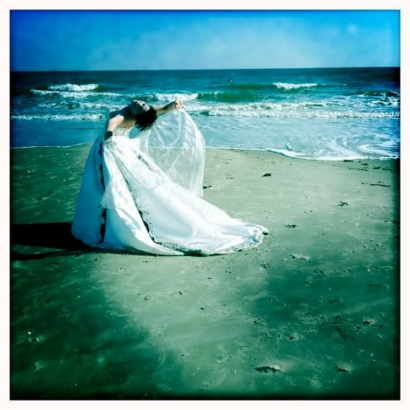 the most beautiful part of the story is the dresses. that i had this selection of wedding dresses all ready to go, and then meghan, our volunteer twitter ride, pulled up.
“i’ve got a wedding dress in the back”, she said, “i’m getting divorced.”
“you’ll have to be in the video, obviously,” i said.
and when we got to the beach, the dress i’d bought didn’t fit, like, AT ALL. someone was incredibly kind and toted it over from the vintage store she worked in. it was a gorgeous oldy-fashioned number, all creamy and spangly, and only $75 bucks. i bought it. i hadn’t noticed it was a size 1, i just assumed that it would fit and if it didn’t, i’d make it fit, as one does with video clothes that don’t actually fit. but i could barely get into it.
so i tried on meghan’s….
which fit like a glove.
so she let me exorcise the demons of her fancy wedding dress, and she wore the ill-amanda-fitting size zero vintage one for her scene.
and as i plummeted with it into the pollution-ridden waves of galveston, a city that’s been continuously plagued with disasters both man-made and natural for a hundred years, i felt like i was part of some sort of girl-power solidarity baptism, in which the tribal sisters of getting-divorced women take their cursed wedding dresses out of their mothballs and wear them into the sea at dawn as a kind of cleansing ritual.
she said she’s going to dye the dress purple.
i wish the hungarians were around to film that too, but alas, they’ve flown back to hungary. i already miss them.
later that night, my writer friend maria headley’s 16-year old niece, sadie, came to watch the soundcheck. she was a teeny punk blonde with an attitude. i loved her immediately.
maria had originally sent her and her uncle over to drop off a book of hers for me & neil, but the book never made it via fed-ex, and neither did the caramels she promised.
but we still let her niece into soundcheck, because…obvi.
when we were done i gave sadie a tour of the tour bus and when we got to the back lounge, where the size zero dress was stuffed in a box, i put it on her.
it fit like a glove.
so i gave it to her as a present, and she wore it to the show.
i love everybody.
it’s going to be a beautiful video.
.„„„„„„„„„
in other “fuck this world is beautiful” news, i had a wonderful dinner in new orleans with neil & ruby bridges.  neil had met her a few weeks before and they’d hit it off, and she lived in new orleans, so we jammed over a beautiful meal in the french quarter the night after neil’s birthday.
ruby bridges was the first black child to attend a desegregated school in the the south, and she was made famous by this norman rockwell painting entitled
“the problem we all live with”: 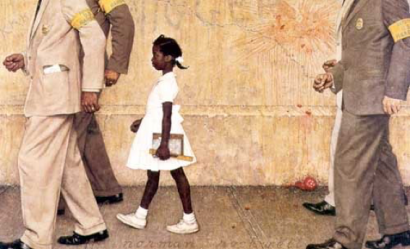 the story of desegregation in the south is a dark one. no pun intended. laws to desegregate schools were passed after “brown vs the board of education” but were all but ignored by many towns….
the white people simply didn’t want black kids in their school, and most of the lawmakers didn’t either. so things stayed put.
finally, in 1960, the pressure hit and a few “token” students, like ruby, were sent, accompanied by federal marshals, to relatively low-income schools in new orleans.
white parents pulled their kids out of classes. ruby wound up being instructed in private by a single teacher and eating her lunch alone in the classroom every day.
outside the school, anti-desegregation protestors hurled insults at her, the news reporters camped out. the whole thing sounds like a serious bitch of a life for a 7 year old.
time marched on, she finished high school, couldn’t afford college though she wanted to go, and got married shortly thereafter and became a travel agent. after her younger brother was shot and killed in a drug-related shooting in the early 90s, she decided to start getting shit done. and now she runs an organization called the ruby bridges foundation, whose stated goal is to her motto: “racism is a grown-up disease and we must stop using our children to spread it.”
i was reading through a booklet she gave me and this statistic horrified me: in 2009, 78% of african american students in new orleans attended nonwhite segregated school.
WHAT THE FUCK?
this year marks the 60th anniversary of her first day walking into that school. meeting her, and reading about her, made me want to Do Things. go look at her site, it’s inspiring as hell.
her site, and her story: rubybridges.com
and here’s her foundation: rubybridgesfoundation.org
love
AFP
and p.s. here’s a picture neil took of me & laura before we jumped out of a plane from 10,000 feet in new orleans: 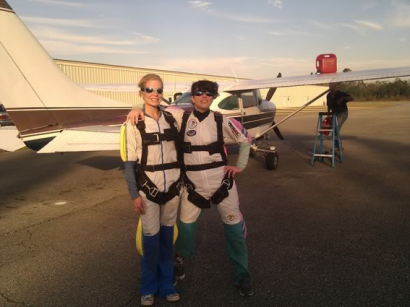 holly gaiman took us and neil and jason webley and casey skydiving. superkate accompanied but wouldn’t jump. you should have seen the texts from my mother.
and p.p.s. 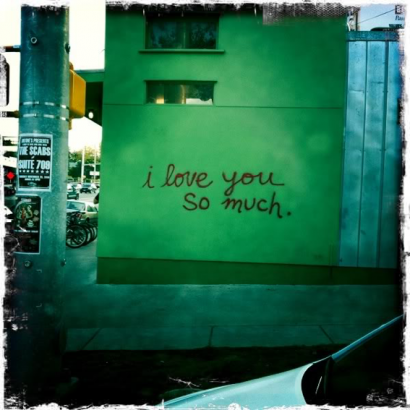 (on the side of a building in austin, TX).
onwards.